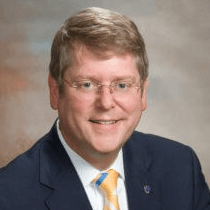 Robert Ross is an active member of the VSCA and the Richmond Claims Association. He is honored to serve as VSCA president for 2021-22. Mr. Ross is the Director and Chair of the Coverage, Property, and Subrogation Sections at Midkiff, Muncie & Ross, P.C. in Richmond, Virginia. Robert Ross has concentrated his practice on the defense of insurance companies and their insureds. Mr. Ross routinely litigates complex insurance defense cases in the Mid-Atlantic Region, primarily in federal courts. Mr. Ross’ practice includes the defense of first- and third-party cases, as well as subrogation actions. Mr. Ross graduated from Hampden-Sydney College in Virginia and Mercer University School of Law in Georgia. He began his career as a law clerk to the Chief United States District Court Judge in Atlanta, then served as an Assistant U.S. Attorney. He is a respected member of the Virginia, Georgia, and District of Columbia Bar Associations. Mr. Ross is AV Peer Review Rated (highest) in Martindale-Hubbell and is recognized as a Virginia Super Lawyer. Mr. Ross was named to Virginia Lawyers Weekly’s “Leaders in the Law” and is also listed in The Best Lawyers in America, where he has been peer-selected as the 2022 Richmond “Lawyer of the Year” in Insurance Litigation. He is also a Fellow of the American College of Coverage Counsel and a member of the Federation of Defense and Corporate Counsel. Mr. Ross is a frequent author and speaker on national, regional and local levels. He is a five-time speaker at PLRB conferences on subjects ranging from “Ongoing Nightmares of Chinese Drywall” to “Commercial Large Loss Arson/Fraud Cases” and more. For the Virginia Law Foundation, Mr. Ross has been an author and speaker on topics such as “Duty of Good Faith” as well as “Taking and Defending Depositions.” Mr. Ross is also active in the civil defense bar, having served as a Director and two-time “coverage” chair of the Virginia Association of Defense Attorneys. He serves as the international Judge Advocate (General Counsel) Emeritus of the Honorable Order of the Blue Goose International, an insurance charitable organization. When away from the office, Mr. Ross is active at his church. Mr. Ross also enjoys time with his family and friends, traveling, cooking, and outdoor activities.